Community wildfire protection is not just about protecting buildings. Proactively preventing wildfire from threatening infrastructure permits fire to be safely used as a managed disturbance in urban interface forests. The Jasper Firesmart/Forestwise program was conducted to shield the town of Jasper as well as restore the Douglas Fir forest in the Athabasca Valley. 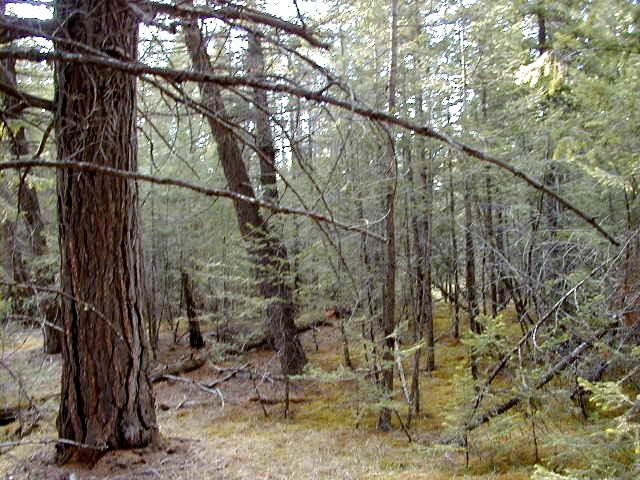 Sustained achievement of long-term EBM goals requires that the tools used to manage forested ecosystems be available. Two of these tools are prescribed (human set and  controlled)  and managed (naturally started, human controlled) fires. But using these tools come with risks in Alberta given the amount of human infrastructure in or adjacent to forests. The consequences of a managed fire escaping and destroying industrial installations, towns or cities are often grave enough to encourage complete fire suppression.

The Jasper Firesmart/Forestwise project was conducted with several EBM goals in mind, including restoring the natural structure of a Douglas Fir forest. However, its chief goal was to create and maintain a less combustible forest around Jasper that would permit Parks Canada to manage wild and prescribed fires in the park with a focus on natural disturbance, not fire suppression.

... the main reason for firesmart is to create a safe environment for fire management in the surrounding landscape.

The Firesmart/Forestwise project linked fire protection and forest restoration. Fire breaks are often perceived as areas devoid of forest fuels. And although treeless gaps are a natural component of the boreal landscape, open canopy forests that result from low or moderate intensity fires were also common, particularly in the montane ecosystems of the Rocky Mountains. For this reason, the Jasper project restored the natural, open structure (and low-flammability) of the Douglas Fir forest, emulating a low intensity fire using selective clearing and prescribed fire.

This project was conducted over 30 months covering more than 200 hectares of forest surrounding Jasper, Alberta. Program leaders concluded that fuel management for the purpose of reducing wildfire risk can be compatible with wildlife conservation and forest restoration. The reports from this project are a series of species-specific mitigations, guidelines, and beneficial practices suited to communities or individual homes. 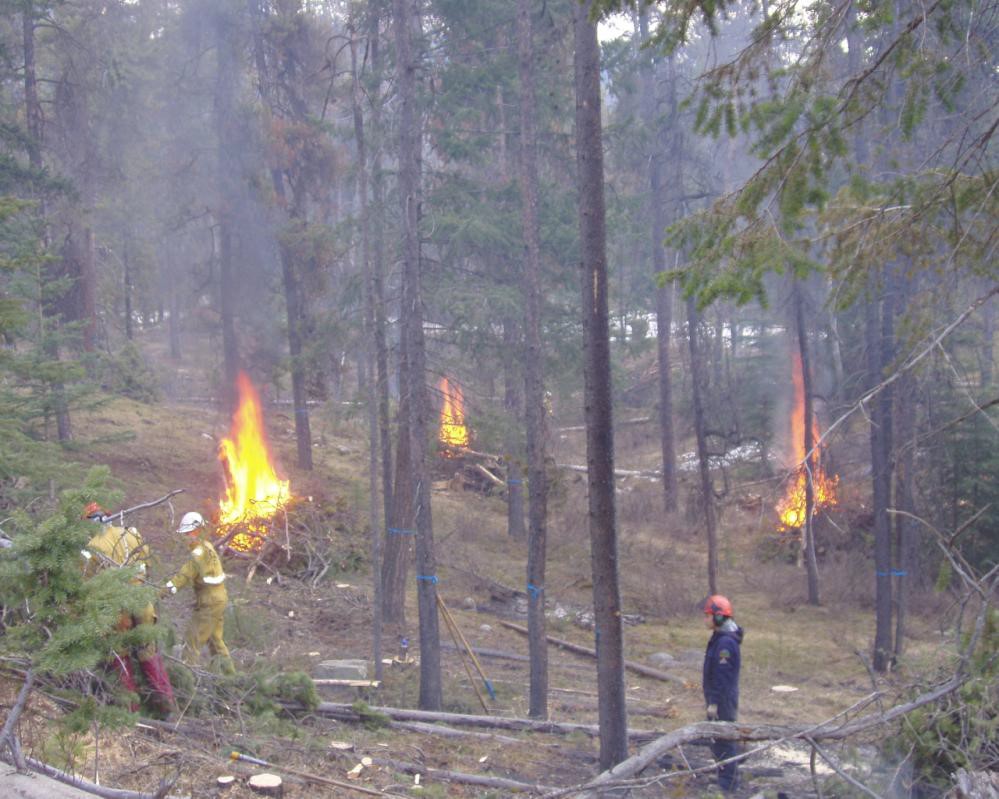 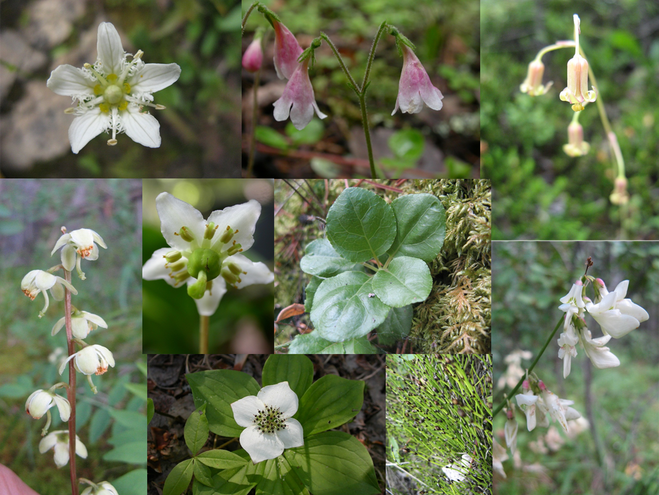 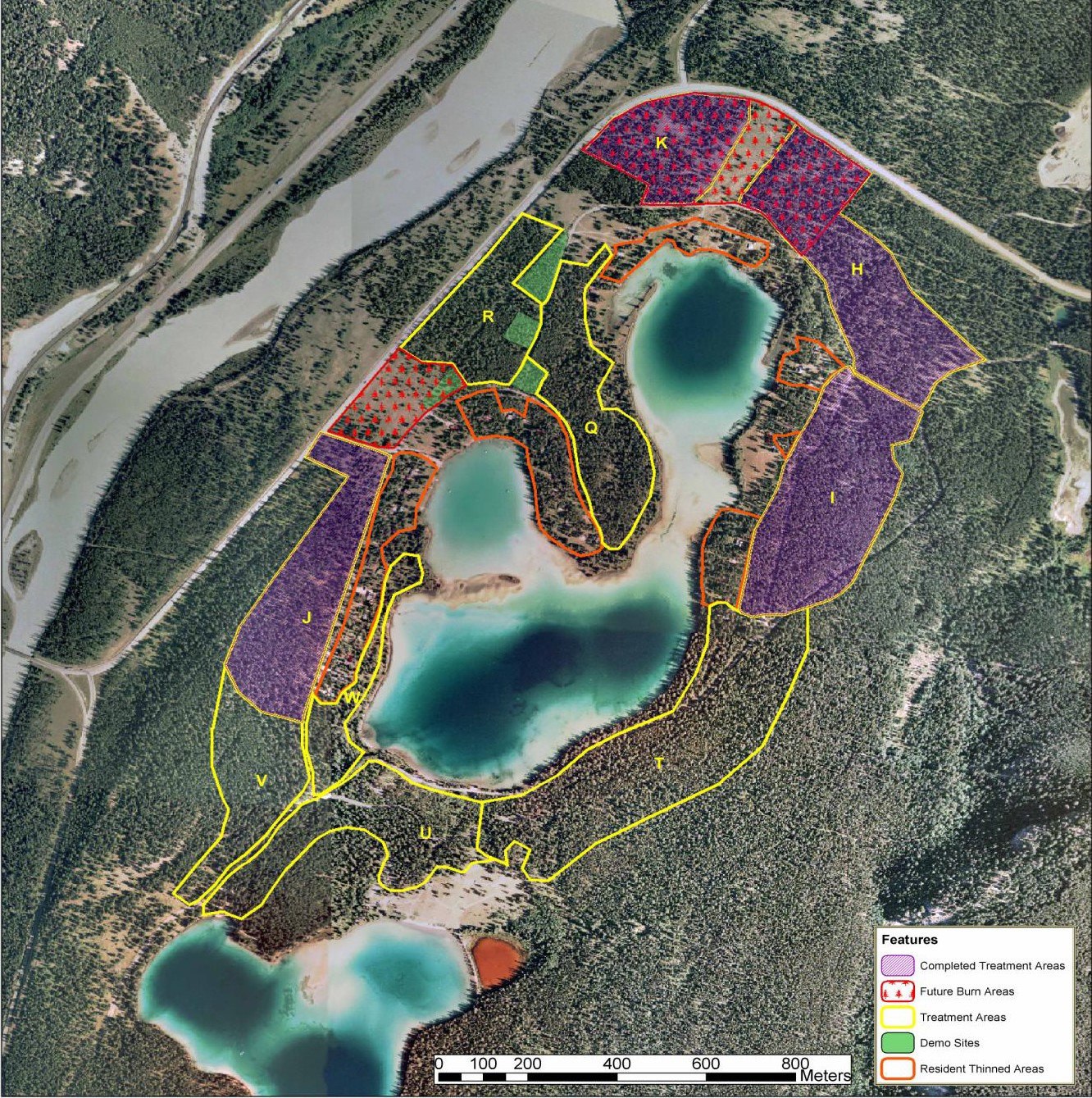 Natural disturbances, particularly fire, played fundamental roles in shaping the pattern, structure and function of Jasper’s ecosystems over thousands of years. This is particularly true in the montane ecosystem where frequent low intensity surface fires have periodically consumed a portion of the vegetation, maintaining habitats such as grasslands, shrub lands and open forest communities. In the absence of fire, these ecosystems are becoming increasingly rare as trees choke open spaces and increase their density on forested sites. It is suspected that plant, insect and animal species characteristic of open forests and grasslands are being lost as a result.

At the same time factors such as constricted mountain terrain, prevailing weather patterns and highly flammable coniferous fuels combine to produce conditions for extremely intense and fast moving wildfires that could seriously threaten or destroy the Town of Jasper and/or surrounding infrastructure. The degree of risk to Jasper’s facilities and residential areas by wildfire is well documented and widely recognized.

Past fire management policies (1930 – 1980) led to over half a century of “successful” fire control in the montane of Jasper National Park. Ironically, the exclusion of fire only exacerbated the problem of protecting communities from wildfire by allowing living and dead forest fuels to accumulate. The risk of large, uncontrollable wildfires increased as a result. In addition, fires burning under such conditions would exhibit abnormally high intensity/severity and cause long lasting ecological damage to soils, plant communities and watershed values.

More recent Park policy also supports management actions to restore fire to park ecosystems through planned prescribed or random managed fire. However, this initiative is effectively blocked in large areas of the park (e.g., Miette, middle Athabasca and lower Maligne watersheds) until measures to limit fire spread into populated areas and protect the public are implemented.

The problems noted above are the cumulative effect of modern human interventions. Parks Canada and other partners in the Foothills Model Forest including the Municipality of Jasper, propose implementing a science-based approach to community wildfire protection founded in knowledge of ecosystems, wildlife and fire behaviour.

The project is located within Jasper National Park at lower elevations of the Athabasca valley that are dominated by continuous coniferous forest. More specifically, forests to be treated extend outwards from the perimeter of the Town of Jasper and the Lake Edith subdivision for distances of approximately 100 to 400 metres in width. Respectively, the total areas treated are about 250 hectares and 100 hectares. The project will be conducted over a span of three years beginning in October 2003. All mechanical work will be conducted during periods of frozen ground between October 1 and March 31 by crews and contractors working under constant supervision by knowledgeable Parks Canada personnel.

Prescribed treatments are based on knowledge of the dynamic range of ecological conditions that existed in the past, and also on published standards for modifying fuels such that advancing “crown” fires drop to the ground, and the risk of convective building ignitions due to direct contact with flames is reduced.

The valued ecosystem components resulting from this process were:

In addition to pursuing restoration and disturbance process goals, the Jasper Firesmart/Forestwise program would not have been successful without deep community involvement. Communities and stakeholders were not only consulted, but local residents were, and continue to be, involved in Firesmart activities. Resident work bees to clear understorey brush in proximity to their homes were one of the first activities undertaken in the project and continue up to today.

Ecosystem Based Management:
Strategy: Management Focus
Outcomes span multiple values
Process: Operational Tools
Mechanical harvest and prescribed fire
Benchmarks: Defining Targets
Forestwise integrates ecological, social and economic filters on top of NRV
...Loading EBM Wheel...
Previous StudyNext Study
We use cookies on our website to give you the most relevant experience by remembering your preferences and repeat visits. By clicking “Accept”, you consent to the use of ALL the cookies.
Cookie settingsACCEPT ALL
Manage consent

This website uses cookies to improve your experience while you navigate through the website. Out of these, the cookies that are categorized as necessary are stored on your browser as they are essential for the working of basic functionalities of the website. We also use third-party cookies that help us analyze and understand how you use this website. These cookies will be stored in your browser only with your consent. You also have the option to opt-out of these cookies. But opting out of some of these cookies may affect your browsing experience.
Necessary Always Enabled

Analytical cookies are used to understand how visitors interact with the website. These cookies help provide information on metrics the number of visitors, bounce rate, traffic source, etc.

Other uncategorized cookies are those that are being analyzed and have not been classified into a category as yet.